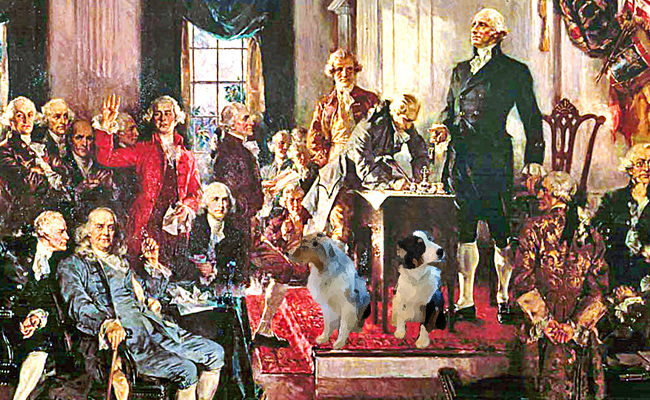 The product of four months of secret debate, convention delegates signed the final draft of the Constitution on this date in 1787.  You are invited to convene for a unconventional Constitutional celebration on Crosscurrents, 9/17 at 8 am.

I.  On September 17, 1787, only 39 of the 55 delegates to the Constitutional Convention signed the document.

II.  The original Constitution signed on September 17th and ratified June 21, 1788 is only five pages long.

IV.  James Madison is viewed as the “Father of the Constitution” despite his misgivings towards some of its content.

V.  The 85 articles of The Federalist were instrumental in getting the Constitution ratified and were written by Madison, Alexander Hamilton, and John Jay.

VII. During the Convention, George Washington sat in a chair that had a representation of half a sun on the top, which Benjamin Franklin regularly gazed at during troublesome moments of the proceedings. Asked why, he said he was unable to decide if the sun was rising or setting. Only when the Constitution was signed did Franklin decide the sun was rising.

VIII. Franklin, at age 81, was the oldest delegate, and had to be helped to sign his name.

IX.  John Shallus, a clerk for the Pennsylvania General Assembly, physically wrote the Constitution down on parchment paper. The Convention paid him $30 for his services, which is worth about $800 today.

XII. The U.S. Constitution is the shortest governing document of any nation today, and contains only 7 articles and 27 amendments. It is also the oldest; Norway’s comes in second and was codified in 1814.

XIII. Giving comfort to grammar errants everywhere, the official copy of the Constitution contains an incorrect word — Article 1, Section 10 uses “it’s” when it should be “its,” even in 18th-century usage. However, the word “chuse” as used in the Constitution was acceptable at the time. So was the alternative spelling of Pennsylvania, Pensylvania; the Constitution actually uses both spellings.