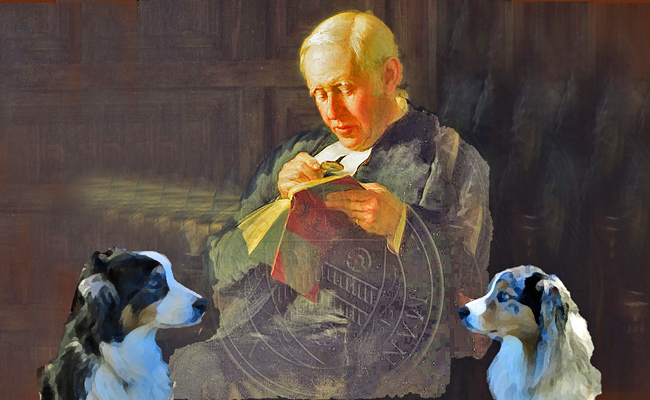 Dr Spooner was born on July 22. 1844, and was the son of a Staffordshire County Court judge. He was educated at Oswestry and New College, of which he became a scholar in 1862 and a Fellow in 1867. Ordained a deacon in 1872 and a priest in 1875, he became chaplain to Archbishop Tait in 1878 and was examining chaplain to the Bishop of Peterborough from 1809 to 1916. He became Warden of his college in 1903 and held that office till he retired in 1924. A lecturer and teacher of ability, he devoted himself to the college and its members.

SPOONER ON KRNN, 7/22:  A distinguished Anglican clergyman and philosophy professor of New College, Oxford, William Archibald Spooner was born on this date in 1844.  Even if you are a “dizzy bean” (busy dean) we hope you have time to listen to Crosscurrents, 7/22 at 8 am.

He published little, and the outside world knew him only from the scholarship of the well-known edition of Tacitus’ “Histories” and his memoirs of Butler and William of Wykeham.

But to a series of generations of his countrymen Dr. Spooner was known not for his administrative abilities nor his scholarship but for the “Spoonerism.” A “Spoonerism” is defined as “a ludicrous form of metathesis or the transposing of initial letters to form a laughable combination.”

In 1879 it was a favourite Oxford anecdote that Spooner from the pulpit gave out the first line of a well-known hymn as “Kinkering Kongs their titles take.”

The anecdote is well enough authenticated, but according to most people who knew Spooner well that was the only “Spoonerism” he ever made – the essence of a “Spoonerism” being, of course, lack of intent, – though later when, thanks to indefatigable undergraduate and alas! graduates and dignified Fellows of colleges, the legends had become legion, he often used deliberately to “indulge in metathesis,” to live up to his reputation.

All sorts of stories, probable and improbable, were invented, the most of which have only to be heard to be recognised as unauthentic. Of the well-worn ones the best are those which made Spooner declare that he was leaving Oxford by “the town drain,” that some unauthorised person was “occupewing his pie,” that at a marriage it was “kistomary to cuss the bride,” and that he was tired of addressing “beery wenches.” Much better authenticated and not even a Spoonerism is his famous reply to a young lady who asked him if he liked bananas. He is said to have retorted, “I’m afraid I always wear the old-fashioned nightshirt.”

Although other famous men have been guilty of “Spoonerisms”, it was the doctor who had to bear the brunt of most of them and to be honoured by having his name enshrined in a word that is a permanent addition to the English language.

Originally published in the Manchester Guardian on 1 September 1930