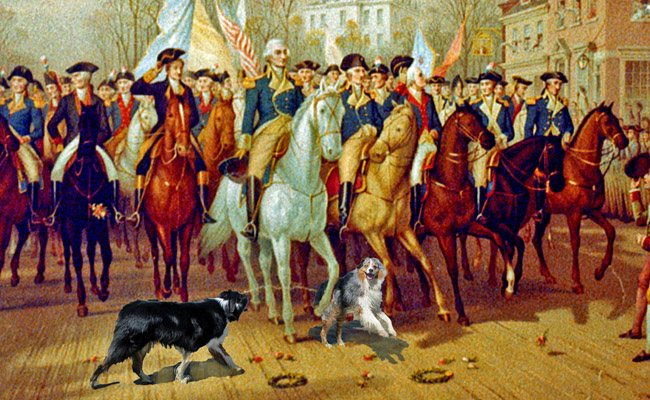 One might say that it was the “original” BREXIT even before the European Union existed.   The previous British exodus of 1783 related to the United States which had only recently come into existence in 1776.

Nov. 25 has been remembered by some folks as a day of departure.  One might say “evacuation”.  It was the day in 1783 that citizens of the newly formed United States said “good bye” to the inhabiting British troops. Evacuation Day, more precisely, was the date in 1783 when George Washington’s triumphant army (known as “rebels” to the British) marched into New York City from the north, while George III’s troops left at the south, ending a seven-year military occupation.

King George’s forces from Britain had been occupying New York since 1776.  The Big Apple had been the main British stranglehold in the Americas, and for most New Yorkers the war years had been ugly. Half of the city had been destroyed by fires. Trade was absent; wharves falling apart, merchants and artisans unsuccessful, and the civilian population dropped from 21,863 in 1771 to around 5,000.

When the Treaty of Paris was signed in September 1783, a mass of people moved for Manhattan. Some were hardened rebels. More were Loyalists, looking for a ticket out of the former colonies. That summer and fall, at least 15,000 Tories fled via the city, including some 7,000 who eventually sailed from Nova Scotia in pa single enormous convoy.

On Nov. 21, Washington and Governor George Clinton had galloped from West Point to Day’s Tavern in Harlem.  They were not at the pub for a pint of ale.  Rather, they had an army to deal with as the 800 soldiers – all that was left of the disbanded Continental Army – was camped at McGown’s Pass (presently upper Central Park).

On Monday, Nov. 24, the news was that the British would head out of town at noon the next day.  And sure enough, at 8 am on the morning of the 25th, a clear, cold day, the Continentals started down the Post Road (basically, Third Avenue). At Bowery and Grand, they happened upon a few Redcoats of the British rear guard still at their posts.  It seems that the Continental Army was a bit early, and the Brits were not inviting them for tea.   Shortly thereafter, a few minutes past 12, as arranged, the British withdrew to the Battery, where rowboats waited to ferry them to their ships.

The Americans trailed close behind. Most of them stopped at Cape’s Tavern, at the corner of Wall and Broad.  Simultaneously, a detachment moved further southward to raise the Stars and Stripes over the fort at the Battery.

There the Americans found that the British had left behind a surprise for the new occupants. The departing British, most impolitely, had nailed the Union Jack to the staff, then greased the pole so no one could get up to remove it. A young sailor named Jacob Van Arsdale then filled his pockets with improvised cleats and climbed the pole by nailing them in place as he advanced up. The American colors were raised, the soldiers fired a salute of 13 rounds, and the crowd gave three hearty cheers and hurried back up to the Bull’s Head Tavern on Chatham Street (public houses seem to figure prominently in our revolutionary history) to welcome the triumphant commanders-in-chief.

Every July 4, we honor the Founding Fathers for their declaration that ”these United Colonies are, and of Right ought to be, Free and Independent States.”  One could convincingly argue that we should remind ourselves in November that it took a hard seven years -308 battles and skirmishes, including three in New York City and 89 elsewhere in the state – to win that freedom and begin to redeem the brave promises of 1776.

It was that poor late-November weather — not to mention the growing popularity of Thanksgiving — that hastened Evacuation Day’s decline. (Why march in the cold when you can feast indoors?)  The last official parade was in 1916. The United States entered World War I the following year. At that point, there was little appetite, understandably, for celebrating British defeat.  We had stood together in the face of world war and global threat.

So, Evacuation Day Is Seldom Celebrated  —————

Perhaps it is just as well. The Sons of the Revolution were reportedly getting a bit elitist about the occasion, using the holiday as an excuse to lord their heritage over everybody else — exactly the sort of snobbish behavior the revolution was meant to reject. Plus, it’s no longer as much fun to opine about the British, who have been our fierce allies for more than a century.  Additionally, there are the original Manhattanites — those who had hunted and fished the plentiful green island for centuries — who never got their Evacuation Day. Their squatters stayed.  The trespasser never left.

So, this week during Thanksgiving, you can give thanks. Today, you might dine with your once-domineering parents and still go home afterward to revel in your hard-fought independence.  You have separated from those folks who raised you into an adult.  You are now independent. For good measure, in memory of the British who evacuated, and from who you gained your independence, you might consider greasing the doorknobs on your way out.