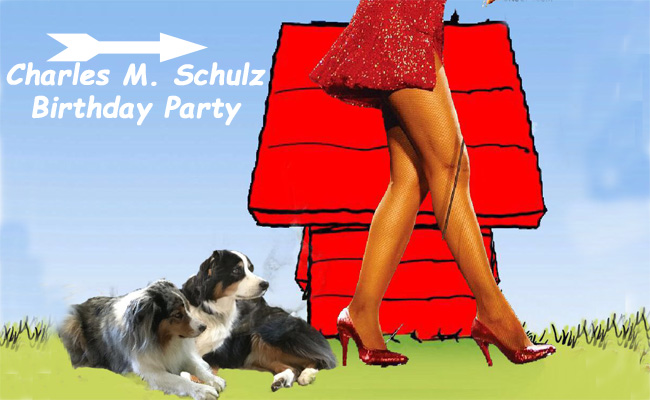 The creator and cartoonist of the globally-popular “Peanuts” characters, Charles M. Schulz was born on this date in 1922.  We hope you avoid the doghouse and follow us to the Schulz birthday on Crosscurrents, 11/26 at 8 am.

As Lucy van Pelt
1. “Don’t let your team down by showing up!” (16 April 1963)
2. “These five fingers: individually they’re nothing, but when I curl them together like this into a single unit, they form a weapon that is terrible to behold!” (5 January 1964)
3. “In all of mankind’s history, there has never been more damage done than by people who “thought they were doing the right thing.” Five cents, please.” (18 November 1971)

All you need is love. But a little chocolate now and then doesn’t hurt.
Happiness is a warm puppy.
Life is like a ten speed bicycle. Most of us have gears we never use.
Just remember, once you’re over the hill you begin to pick up speed.
I have a new philosophy. I’m only going to dread one day at a time.
Don’t worry about the world coming to an end today. It is already tomorrow in Australia.
I love mankind; it’s people I can’t stand.
Life is like an ice-cream cone, you have to lick it one day at a time.
No problem is so big or so complicated that it can’t be run away from!
Sometimes I lie awake at night, and I ask, ‘Where have I gone wrong’. Then a voice says to me, ‘This is going to take more than one night.