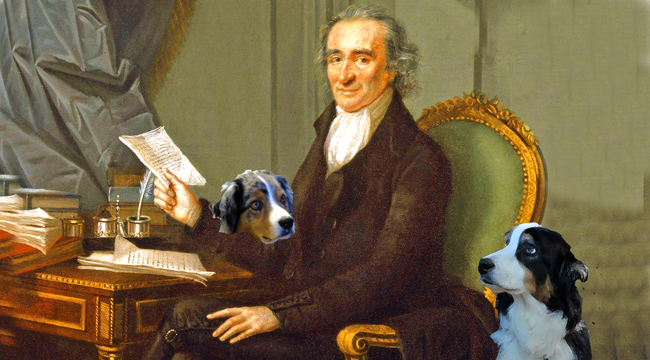 THOMAS PAINE ON CROSSCURRENTS, 1/29:  An English American writer and political theorist whose works paved the way for the Declaration of Independence, Thomas Paine was born on this date in 1737.  Few people have spoken to all the ages, to all people and nations, and apparently to some dogs, and you can join the Paine birthday on Crosscurrents, 1/29 at 8 am. ( radio link:  http://www.krnn.org )

“The mind once enlightened cannot again become dark.”
― Thomas Paine, A Letter Addressed to the Abbe Raynal on the Affairs of North America

“These are the times that try men’s souls. The summer soldier and the sunshine patriot will, in this crisis, shrink from the service of his country; but he that stands it NOW, deserves the love and thanks of man and woman. ”
― Thomas Paine, The American Crisis

“Independence is my happiness, and I view things as they are, without regard to place or person; my country is the world, and my religion is to do good.”
― Thomas Paine, Rights of Man

“Whatever is my right as a man is also the right of another; and it becomes my duty to guarantee as well as to possess.”
― Thomas Paine, Rights of Man

“To argue with a person who has renounced the use of reason is like administering medicine to the dead.”
― Thomas Paine, An American Crisis

“But such is the irresistible nature of truth, that all it asks, and all it wants, is the liberty of appearing.”
― Thomas Paine, Rights of Man

Where knowledge is a duty, ignorance is a crime. ~~ Thomas Paine, Virginia Papers

A long habit of not thinking a thing wrong gives it a superficial appearance of being right.  ~~~ Thomas Paine, Common Sense